Shannon here: Linda Hanna shares insight into her real life romance plus a chance to win a PDF e-copy of Come Next Winter, which is book one in SEASONS OF CHANGE series she co-authored with Deborah Dulworth. Comment or answer the question at the end of any post dated August 28 – 31 to enter the drawing. Deadline: Sept 8th, 11:59 pm central time. Here’s Linda: 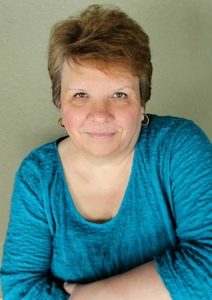 Before We Said I Do

I was about to write off the entire male species when Bill walked into my life. An unfaithful boyfriend had removed any desire for another relationship. A dating hiatus definitely topped my to-do list.

The first time I went out with Bill it was due to my new roommate’s urging. However, I continued to date him because not only was he quick witted, but also sweet and full of fun. Without any pressure, my spirit began to heal.

A couple of months into dating I began to notice subtle changes. Thoughts of Ol’ What’s-his-name were history. My recovered heart began to beat a wee bit faster whenever Bill pulled into the parking lot – which was every evening at this point.

Like most couples falling in love, our conversations turned more serious as we tiptoed around the subject of marriage. Even though our thoughts on wedded bliss were right on point, we never actually talked about a wedding. That is until he proposed.

Imagine the shock when we discovered our wedding dreams were poles apart. Bill wanted a large wedding with all the trimmings. Since my two least favorite things in life were being the center of attention and having my picture taken, I wanted to elope. The idea of repeating vows in front of the pastor with just our two best friends as witnesses seemed perfect.

Compromise was the answer. Forty people were invited to attend our small ceremony – which was still more than enough to make this anxious bride hyperventilate.

Since a church wedding was now the plan, I needed to check out the ceremony. During a visit home, I borrowed Dad’s little preacher’s book, found the shortest service, and trimmed it down to the basics – Do you? We do. You are! Chop-chop – and the anxiety would be over. Dad was less than happy about it.

With a date set and church booked, the time had come for dress hunting to begin in earnest. With my maid of honor in tow, we hit every bridal department and shop in our large city. No one seemed to understand the concept of informal. One salesgirl tried to talk me into trying on various styles because no bride really wanted a simple dress. In the last shop, we finally found a style close to what I wanted except the train was too long. The shop owner nearly had a cow when I asked her to shorten it by a foot. (Her theatrics zapped my courage to ask for puffy sleeve removal too.) At the final fitting, we made arrangements for me to pick up the dress and veil on the day before the wedding.

On the way to the rehearsal dinner, I stopped at the appointed time. The owner informed me that my parents got the dress that morning. This was impossible since they lived in Ohio and wouldn’t be arriving until just before the ceremony. She insisted. Nearly in tears, I refused to back down and sent her to the storage room five times before it was miraculously located.

The fun didn’t stop there. The veil wasn’t with the dress. After convincing the owner that my folks couldn’t have it either, she told me to return at 10 p.m. I came back and should’ve checked it before leaving. However, being relieved to actually have a veil in hand, I left. The next morning at the church, we discovered she gave me the wrong one.

Ten minutes before heading down the aisle, Deb, the out-of-breath maid of honor, ran into the room. “I hate to tell you this, but Bill’s a no-show.” My stomach dropped and his glaring mother took off like a bat out of you-know-where. The poor, nervous groom was simply in the side room with his best man waiting for his cue.

We had picked the hottest and most humid day of the year for our wedding, and, of course, the church wasn’t air- 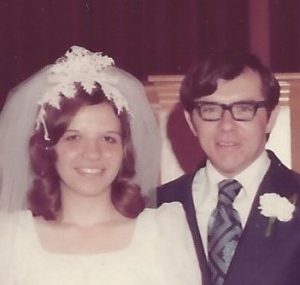 conditioned. By ceremony time, my straightened hair was in curls. A steady trickle of perspiration ran down my scalp, neck, and back while Bill’s glasses kept slipping down his nose.

Dad reluctantly followed the abbreviated ceremony, but then prayed – for-ev-er. Give a preacher a mic…

In spite of the hurdles on our trip to the altar, Bill and I have been married 45 years. We’ve learned the key to a happy marriage is to hold on to each other not only during the good times, but also through the tough patches. God has always been the center of our relationship, and continues to bless us as we look forward to many more years together.

About Linda: Linda Hanna has written magazine articles, devotionals, as well as partnering her skills with businesses, schools, and churches. She’s a Christian wife, mother, grandmother and as a Preacher’s Kid, has been active with church related projects since birth. An avid collector of snowmen, she also enjoys a good archeological dig in antique stores with Bill. They make their home in central Indiana. 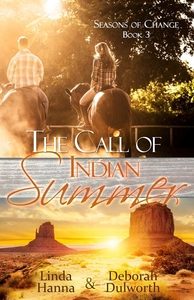 About the book – The Call of Indian Summer:

Will their struggles and personal doubts overpower the prospect of love and loyalty?

Recently widowed Sue North leaves her stately Vermont home to work with her daughter and son-in-law caring for orphans near Apache Pointe, Arizona. The last thing Sue wants in her peaceful new life is to catch the eye of another man. But then, in one jaw-dropping moment, suave attorney, Brian Campton, saunters into her path. After dealing with her husband’s abuse, can she find the courage or desire to begin a relationship with someone as serious-minded as Brian?

Meanwhile, Stuart Drake, the handsome survivor of a loveless marriage, is on the lam from the dogged church ladies keen on his availability. He chooses the tuck-tail-and-run method to guard his battered soul, all the while yearning for affection he’s never known. Has finding the joy of a shared love eluded him? Enter Sue North. Stuart finds himself tripping over his heart. She’s beautiful, vibrant, and . . . too young. The age gap haunts him. Can he compete with the flirtatious lawyer’s money and sophistication?

The Call of Indian Summer will lure you into the struggles and personal doubts which challenge the prospect of love and loyalty.

Question for Readers: Did you or anyone you know encounter any hitches on the way to getting hitched? 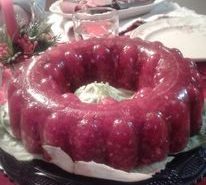