Inspirational author, Rebecca Carey Lyles shares romantic excerpts from her latest release, Passageways, a collection of sixteen short stories by 4 different authors. Comment or answer the question at the end of the post to enter the drawing for a copy. Deadline: Dec 27th, 11:59 pm central time. Here’s Rebecca: 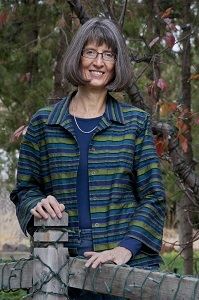 My critique partners and I assembled some of our short stories in a book called Passageways last summer. As you might imagine, the collection has a wide range of subject matter and writing styles, yet we included romance here and there. I sifted through the stories to find romantic moments for this post and think you’ll enjoy the excerpts.
“Eighteen Minutes” by Peter Leavell –
But now, standing on a pine-scented hillside with a railroad track between us and dozens of passengers gawking from train windows, I saw my wife with new eyes. Her hair was disheveled, her gaze wild and fiery, her words fierce and angry. Rose was a different woman than the one who’d meekly asked me to stay home from work.
I chuckled. She piqued my interest. I liked it.
“Morning Song” by Rebecca Carey Lyles about a widower –
Monday morning, Charlie woke long before dawn. Hands behind his head, he stretched and grinned, already thinking of the previous evening. That Amanda was something else. Been a long time since he’d had so much fun, if that was the word for talking until midnight.
“The Hand of the Princess” by Lisa Hess –
Before Arturo could move or say a word, Gwen threw herself into his arms and clung to him as if she’d never let go.
Stunned, he pulled back and held her at arm’s length.
She smiled the old Gwen smile, confident and fond, with just a hint of amusement, and punched him, not gently, in the shoulder. Then she kissed him and said, “Oh, Arturo, don’t even start. Lance won my hand, but you own my heart.”
“Follow the Moonbeam” by Rebecca Carey Lyles about a middle-aged married couple –
A flower-bordered envelope lay beside the candle. Her name was written on it in Dan’s square, bold print. Marie’s heart raced. Why would he write her a letter? He didn’t even like to write checks. Was he planning to leave her but afraid to tell her to her face? With shaking hands, she slowly opened the envelope and slid out a matching sheet of perfumed paper.
Follow the moonbeam to find the one who loves you most.
Another Lisa Hess story, “Invisible Thread” –
Michael watched his wife mentally remind herself for the millionth time that this was the reason she fell in love with him. He was the only man she’d ever met who actually wanted to know what was going on in her head. She’d told him this.
Over the course of their marriage, however, she’d become less willing to share her thoughts, as if she expected him to read her mind. The irony… Still, he was obsessed with her inner world, and he would expose it word by begrudging word if he had to.
He smiled as she literally shrugged off her irritation. Because she still loves me. Because she knows how many women would kill for a husband who actually listens.
The book concludes with a Christmas story titled “Spirit of Christmas” by Rebecca Carey Lyles – which is fitting for this December blog –
“Ah, Christmas Eve.” Jack Wymore loosened his tie, kicked off his shoes and settled into the couch cushions beside his wife.
Carol snuggled close. “The kids thought this night would never come.”
He wrapped his arms around her and rubbed his day’s-end chin stubble over her soft auburn hair. Soothed by her nearness and the sound of logs crackling in the fireplace, he felt the tension of a long and hectic day begin to drain away.
To read these stories and others in the collection, you can find Passageways in both print and ebook formats online, or it can be ordered through your favorite bookstore. For those with eReaders, Passageways is available on Amazon, Barnes & Noble, Kobo and iTunes for 99 cents through December.
Wishing you a Season of Celebration filled with God’s love and sweet moments with family and friends.
About Rebecca: Rebecca Carey Lyles grew up in Wyoming, the setting for her award-winning Kate Neilson novels, “Winds of Wyoming” and “Winds of Freedom.” She now lives in Idaho, where she serves as an editor and a mentor for aspiring authors and as a coach for women transitioning from prison to life on “the outside.” She’s currently writing the third book in the “Winds” series. Learn more: http://www.beckylyles.com, http://widgetwords.wordpress.com
About the short story collection – Passageways:
Four authors who also happen to be friends. Sixteen unique short stories. From tales of spies and trains and John Wayne, to monks, magic and marriage, you’ll be entertained, challenged and inspired.
Valerie D. Gray, Lisa Michelle Hess, Peter Leavell and Rebecca Carey Lyles met several years ago at a newly formed writers group in a back corner of Rediscovered Books, an Idaho indie bookstore. Over time, they became critique partners who share the ups and downs of the writing life as well as act as first readers for one another’s work.

Question: Have you ever bought a short story collection or novella collection featuring several different authors?